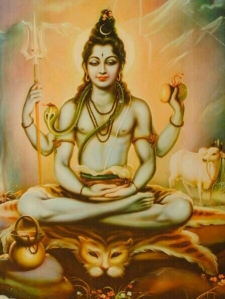 A wealthy trader decided to travel the world seeking out rare objects he could sell for a small fortune to private clients. One morning his ship landed on a beautiful beach. He saw a skinny wild-haired fellow racing up and down the shore, waving a beautiful gem-flecked glass bottle at passersby and begging them to buy it. Curious, the trader leapt on to shore and asked the madman what he was up to. The unkempt fellow pointed angrily to the bottle—there’s a genie in there, he said, and I finally managed to trick him back inside, but I’m terrified he’ll somehow manage to escape. Why are you so scared of the genie? The trader enquired. You won’t believe this, the man muttered, but not too long ago I was a handsome and charming fellow with oodles of money. Then I was stupid enough to buy this bottle from a chap who looked just as terrible as I do right now. He told me the genie trapped inside is so powerful he could do anything for me. Greedy fool that I was, I grabbed it from him. Oh yes, he was telling the truth, but just look at what this cursed genie has reduced me to!

Give it to me, the trader said eagerly. Here, the madman said, take it for nothing! But if you value your life, don’t open the bottle—just enjoy its beauty and you will be fine. If that fellow gets out, he’ll make your life hell. You can’t imagine what he’s put me through!

The trader hid a smug smile; he didn’t tell the crazy fellow that he owned so much property that he could keep the genie busy for the rest of his life. He took the bottle, set sail for home and was soon savoring a fine blend of tea in his living room. Then he remembered the bottle and decided to put the genie to work. He opened the bottle and the genie whooshed out, a giant creature with great hoops of beaten gold in his massive ears and whose shaven head touched the roof of the hall. Ah, master, so very kind of you, he murmured in an oily voice. Now give me something to do, please. The trader rubbed his hands in glee. Free labor from a genie!!! Ah well, he said to the monstrous being, recently I purchased a thousand acres of land by the seaside. I want the entire perimeter fenced so well that no intruder will even dare to approach it. Can you do this for me? The genie nodded enthusiastically. Course I can, he said, but before the merchant had even finished his tea, he was back and demanding more work.

Shocked, the trader ordered him to fence all his other properties, but the genie finished his work in a trice and was back for more. This went on for a couple of days and the trader was being driven nuts for the demanding genie would not let him eat or sleep. His housekeeper, a wise old woman who sympathized with his sorry state, whispered in his ear that it was time he visited the old sage on the nearby hill for advice. So the trader gave the genie some other work, slipped out and raced all the way up the hill. Fortunately the sage was in his cave and listened to his sad story. Ah, the sage murmured. The solution is simple. Get this genie to dig a very deep hole on one of your properties and ask him to insert a steel pole into it. Then ask him to climb up and down that pole until you summon him to do some work.

Although the genie was fuming, he had no choice but to obey. The trader sighed with relief, for he knew the sage had saved his life. It was greed that had almost killed him, he also realized, and then and there he decided to give up his materialistic existence and vowed to commit himself to spiritual practice. 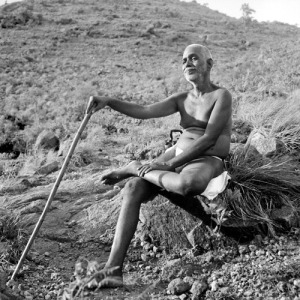 This tale is important to me because of its mystical meaning. The genie is the mind, which can accomplish miracles in a trice (in imagination); the deep hole is the conduit to the substratum of our true being (existence-awareness and bliss), and the steel pole is the powerful mantra seekers use to keep the mind from wandering, harassing and vexing its owner to distraction. For those who are drawn to Advaita, the Mahavakyas make perfect mantras for they remind us that we are the Self, blissful, immortal, loving, wise and connected to all beings. Choose one and stick to it, and once you put the evil genie back into the bottle, make sure you never ever let him loose to hassle you again!

Greetings from Arunachala, Shiva the Destroyer in the form of a hill of fire and light, who reveals the secret way to the Spiritual Heart where the mind finally dissolves into bliss!

1 thought on “ENTICE THE GENIE BACK INTO THE BOTTLE, AND DON’T LET HIM OUT AGAIN!”