The world into which I was thrust made absolutely no sense to me. I was solemnly informed that there was a God who had created the world, but, even as a child, I considered this arrant nonsense. God, I was further told, was pure Love, which made me even more dubious about the authenticity of this wisdom. If God was pure love, I wondered, how in sweet hell could he have created a world so full of ignorance, misery, hatred and suffering? Did it give him perverse pleasure to watch babies starving, men being blown to bits in senseless wars, innocent brides burned to death for lack of a larger dowry, monstrous inequities in wealth, and a myriad other forms of implausible wickedness?

Soon I discovered that pleasure could be derived from this same world simply by indulging one’s senses and using one’s talents to become rich and famous. Yes, one could enjoy a variety of entertainments, sparkling if fickle companions, terrific parties, sex, drugs, and rock & roll. But why did a feeling of pain and emptiness invariably follow indulgence in these so-called pleasures? Instead of waking us up, I discovered too, this hollowness often drove humans to chase new forms of pleasure, which also ended up in the same dreary hell—which is why, I supposed, insanity is defined as doing the same thing over and over again and expecting different results.

I continued to ask questions and was punished for being recalcitrant and hard to please—why couldn’t I be a good girl and just follow the damned system? But castigation only intensified my yearning to discover a reality that made sense to me. In the process, life knocked me down again and again. My innate sense of honesty did not prevent me from having several skirmishes with the crooked, those who would tell a string of lies to get what they wanted, either to better their material prospects or to bolster their egos, or both—and this no matter the ruinous cost to others. All of this affected me drastically and I spun into dysfunction myself, until my fervent pleas for aid were heard and I stumbled gratefully onto the path that leads to the Spiritual Heart.

Unlike dilettantes who dabble in esoterica, my own quest to find the unsurpassed peace and joy that eastern sages informed me was my true nature was urgent and desperate. Confronted by a stark choice—either to make peace with reality, or die, I chose to live. I would live well, I decided, for the best revenge against all those who inflict suffering on innocents would be to shine like the rare diamond my gurus assured me I was.

Gradually doubt gave way to calm confidence. The teachings on karma, reincarnation and shunyata (emptiness) were razor-sharp swords I used to slice through reality, even as I employed the tools of meditation and yoga to balance the physical with the spiritual. In so doing, it became easy to forgive the past and all its mistakes. Humans were not intrinsically evil, I realized, but ignorant—and this ignorance was not of the academic variety, but the ego-driven misbehavior of those who do not believe in cosmic laws of cause of effect; oblivious that the karmic pendulum will sooner or later swing back to give them the same pain they wreak on others, they continue to act with arrogant recklessness.

Now ‘prarabhdha karma’ refers to that portion of our karma that we are born with and which must run on to the end of our lives, even after we are finally free of illusion. As the seeker burrows deeper into the Spiritual Heart, where the final battle rages between mini-me and the immortal Self (our true nature), s/he often must endure dreadful trials and tribulations. Why is this? Only because there is mountainous karma to be burned before the final scales fall to reveal the blazing light of the Infinite.

Recently I read this statement: Be calm and follow your bliss. It struck me deeply, because although I’ve come a long way from the troubled adolescent that I was, life can still be difficult. What is this bliss we must follow? It is our dharma, the reason we incarnate into a particular form and matrix. Dharma is what the Blue God Krishna advised Prince Arjuna to follow when he was reeling with doubt on the ancient battlefield of the Kurukshetra. Arjuna did not want to destroy his kinsmen; wasn’t it better to surrender his own life for the sake of peace? he asked Krishna. Fight the good fight, my friend, Krishna advised him, and let the Divine take care of the consequences. It is your dharma to be a great warrior assigned to restore balance to a sick world. And, infused by the spirit of the Divine, Arjuna picked up his magical bow Gandiva and once again pledged himself to fighting the wicked.

If we study our lives carefully, we will find subtle patterns that manifest every now and again. Details and characters will differ, but the basic pattern is the same. It is these karmic patterns that are the source of our suffering; so we focus not on fighting the external enemy, who will in time self-destruct, but on dissolving these insidious demons that reside in our own consciousness. For this, I use Ramana Maharshi’s Direct Path of Self-Investigation and the timeless teachings of the sage Nisargadatta Maharaj. 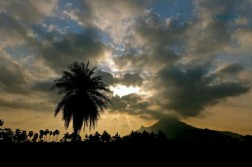 If we sincerely seek a higher path, we will eventually discover our specific dharma. If we can still our mind for long enough to listen to the Inner Guru, it instructs us on how to act. Then we must follow this advice, despite the storms and tempests of relative existence. We must fight lower consciousness in ourselves and in others—whether it has taken the form of dangerous vices that cause us to stray off the path, an abusive husband, a crooked boss or politician. Sometimes it means we must let go of someone who has chosen betrayal as a way of life. Above all, as we commit to the light, we must stay calm—if we keep our objective in mind, which is to merge into the unalloyed happiness that is our true nature, we can survive almost any attack. Invisible forces of light and legions of angels will hover around us too, giving us the strength, clarity and courage to take on the dark side and to win.

Greetings from Arunachala, Shiva the Destroyer in the form of a hill of fire and light, whose vow is to dissolve all that blocks us from knowing that we ourselves are nothing but Love and Light!