Six hundred years or so ago in the fabled land of Rajasthan, Home of Kings, Princess Mira blossomed under the benevolent guidance of her grandfather. Many versions of her amazing life in 14th century India abound; this particular retelling is not to please the historian or the scholar, for I am neither, but merely to give you a sweet taste of the soul of an exceptional female who transformed both her inner and outer worlds.

Mira was exquisitely lovely, talented and intelligent; her life was a sparkling tapestry of everything a young royal could dream of. Aware of her unusual potential, her grandfather encouraged Mira to immerse herself not just in the scriptures and in the art of making superb music, but also to acquire the skills of archery, fencing, horseback-riding and chariot-driving, for that was a time of frequent war.

At fourteen, Mira was persuaded to marry Rana Kumbha of Mewar, who adored Mira not just for her beauty but for her passionate love of god. Mira could well have lived out her life as just another of India’s pampered royals; instead her unflinching passion for the Blue God in the face of the hostility she faced from her in-laws—for refusing to abandon Krishna for the family deity Goddess Durga, for befriending holy men, and for proclaiming the Blue God as her true husband—gradually metamorphosed her into a mighty exponent of Prema Bhakti (Divine Love). Today, six centuries after her death, Mirabai is famed as an inspired poet-saint whose tender odes to Krishna have endeared her for all time to the Indian masses.

Why Krishna? Devotees see Krishna as an omnipotent divine being who incarnates on earth from time to time and in infinite forms to restore righteousness. Spectacularly beautiful and charismatic, Krishna is hued the colour of a blue lotus, or a blue cloud—for blue signifies transcendence. It is said that when Mira was little, she saw a wedding procession and asked her mother who she would marry; her mother laughingly said, oh, your bridegroom will be Lord Krishna himself.

Mira took these words to heart and begged a travelling mendicant to give her his precious statue of Lord Krishna. (Some say this mendicant was Raidas, a disciple of Kabir and a low-caste cobbler who, in the caste-ridden ethos of 14th century India, boldly stated that it is not birth but one’s karma that decides one’s fate.) Little Mira was entranced by this statue: She spent most of her time worshiping it as if it were real, dancing, singing, chatting, and even sleeping with her beloved Blue God. 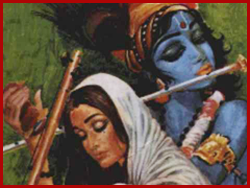 The Blue God was now her husband, and Mira was reluctant to marry a mere mortal. Still she obeyed her beloved grandfather when he ordered her to marry the Rana of Mewar. In the sumptuous palace of her in-laws, however, Mira refused to swerve from her adoration of Krishna. Infuriated, her in-laws tormented her and spread scandalous make-believe tales about her love affairs in order to cause havoc in her husband’s mind.

In sorrow, Mira wrote to the saint Tulsidas: My in-laws won’t allow me to worship my Krishna, she complained. And yet I cannot break my bond with Him. Tulsidas was direct with her: Abandon those who cannot understand your passion for god, even if they are your dearest relatives! Many saints have done so and their lives were all the happier. Our union with God alone is true and eternal; all other relationships are unreal and temporary. Mira took solace in his words and carried on with her devotions.

News of her delightful paeans of praise to Krishna wafted across northern India and into the ear of the mighty Mughal Emperor Akbar, who yearned to hear the lovely Mira. Now the Rajputs and the Muslims were arch enemies—for Akbar to sit among her audience could incite the proud Rajputs to war. Undeterred, the Emperor traveled to Chitore in disguise with his court musician Tansen and entered the temple to hear her sing. So profoundly moved was Akbar by Mira’s radiance that he touched her feet and placed a necklace of priceless gems in front of the idol of Krishna.

Word somehow got to Mira’s husband about the Emperor’s visit; in a fury, the Rana ordered Mira to drown herself for bringing disgrace to his noble clan. Mira proceeded to the river, singing and dancing in ecstasy all along the way. Then an arm encircled her waist. She swung around to see her beloved Blue God and fainted with ecstasy. When she opened her eyes, Krishna was still with her. My beloved Mira, he whispered into her ear, your life with your mortal relatives is over. You are absolutely free. You are and have always been mine. Leave now for Vrindavan.

Mirabai walked barefoot on the hot sandy beds of Rajasthan all the way to Vrindavan, the holy city associated with Krishna’s early life, when he lived with the Gopis or milkmaids. At Vrindavan, she reunited with her guru Raidas. Drawn by her luminosity, people flocked to hear her sing and dance; one of these devotees was no other than her repentant husband, garbed as a mendicant; revealing his identity, the Rana begged Mirabai to forgive him and asked her to return to Mewar as his Queen. Mira must have blown him away with her response. “What is lineage, heritage or inheritance?” she inquired. “What is the meaning of this ridiculous caste system? Who is man and who is woman? I am no more Queen than you are King! Only one King exists for me and my life belongs entirely to him!”

Overcome by the force of her divine love, the Rana prostrated before her and left Vrindavan, a changed man. As for Mira, her fame continued to spread; and yet, when later her husband begged her once again to return to Mewar and promised she could live in the temple of Krishna and do as she pleased, Mira agreed.

Mira’s travels were far from over…from Mewar she returned to Vrindavan, then traveled onward to Dwaraka, accompanied this time by the devoted Rana. In Dwaraka, her husband once again invited Mira to return to Mewar; reluctant to leave her Krishna, Mira asked permission to spend the night at the Temple of Ranchhorji. Next morning her lifeless body was found lying at Krishna’s feet; her devotees believe that sometime during the night, her spirit fused with her beloved Blue God. 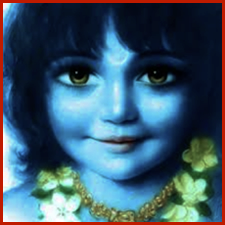 Another version of Mira’s life claims she refused to return to Mewar with the Rana. Returning to his kingdom alone, her husband was forced into battle with the Mughals and died of his resulting wounds. Now that Mira had no royal male to protect her, her father-in-law attacked her viciously, ordering her to voluntarily throw herself on to her husband’s funeral pyre. (Suttee is the practice of so-called “voluntary suicide” customary among Rajput women upon the death of a husband.) “My lord and master is Krishna!” Mira asserted fiercely, once again challenging the rigid Rajput patriarchy. “My real husband is immortal!” And no matter how hard her in-laws urged her to do the righteous thing and burn, baby, burn, Mirabai stuck to her guns, refusing to be reduced to cinders in this most humiliating and brutal of ways. She wanted to stay alive to sing her songs of praise to the Blue God—and who but Krishna could stop her?