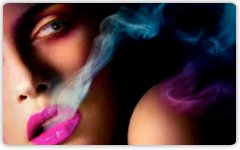 During my teens in south India, I sneaked outside during a boisterous party for a secret puff. An older male relative caught me in the act. “Put that out immediately!” he ordered, even as he lit up his own ciggie and exhaled a stream of toxic smoke in my direction. “Think you’re cool to ape those foreign movie stars, do you? Well, let me warn you, young lady, an Indian woman who smokes is seen as nothing but a whore!”

“What about you guys?” I’d demanded, itching to throttle the arrogant sod. “You smoke like a chimney! Are you a whore?” He’d sighed and shaken his head, despairing. If I didn’t stop smoking pronto, he added sternly, he’d advise my father to get me married as soon as possible — it being sound Indian policy to tame a hellion before she brought unutterable shame to the family. I’d stomped away in a huff, too proud to let him see how his words had both shaken and infuriated me.

But I could not stop brooding over what he had said — why did I want to keep smoking? The truth was complex: one major reason was that cigarettes were available for me when people and situations let me down. And so I continued to smoke, on and off, for decades, despite all the wisdom and training I was simultaneously acquiring. Looking back, I can see that on the psychological level I smoked to separate myself from the traditional herd of Indian women, to make myself unwanted on the marriage market, to tell the guys that if you can get away with it, so can I! END_OF_DOCUMENT_TOKEN_TO_BE_REPLACED

I got a report of their encounter with the tulku a couple of days later. Interestingly enough, Tai Situ Rinpoche had begun his interview by recounting how Mara — lord of death and sensual pleasure — had tempted Gautama Buddha on the eve of his enlightenment.

Being ultra quick on the mark, Mara was aware that this time Gautama was going to escape his oily clutches and permanently transcend samsara. What really messed with his wicked head was knowing that in so doing, Gautama would be throwing open the portals of enlightenment to countless others. In a terrible funk at the potential loss of his power over gazillions of lost and befuddled souls, Mara unleashed his army of demons on the brilliant meditator, seated calmly beneath the spreading bodhi tree.

Like Satan, Mara is a seasoned antagonist who has plumbed the essence of the human heart and devised an arsenal of lethal tactics to crumble the defenses of even the most committed spiritual warrior. Mara began his assault by promising Gautama prominence and pleasure if he gave up his quest for enlightenment. Mixed in with these enticements were dire warnings about the consequences of Gautama shying away from his duties as a prince. END_OF_DOCUMENT_TOKEN_TO_BE_REPLACED