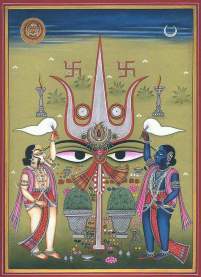 Right before the millennium, at a birthday celebration held in a spacious loft in downtown Manhattan, I fell into deep conversation with an eccentric artist who was rapidly rising in a city where the competition is known to be beyond fierce. He’d always been intrigued by Indian art, culture and philosophy, he told me, and his art reflected this interest. He then proceeded to ask me searching questions about my life in south India, including how and why I had made my way to the Big Apple, and I found him to be highly intelligent and perceptive—no, this was not superficial party talk, but a true meeting of souls.

In turn he spoke about his own life, and I was stunned by his revelations, particularly because he appeared to be the product of a loving background. He told me that his mother had fled her vicious alcoholic husband when he was only three and that his father had then turned his rage on him, abusing him sexually and beating him viciously, and no one had been around to protect him. END_OF_DOCUMENT_TOKEN_TO_BE_REPLACED