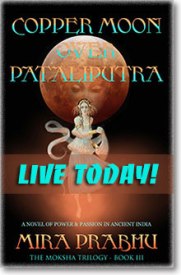 “Against the dazzling epochal backdrop of the Mauryan Empire in ancient India, celebrated for its liberal, humanist and free-thinking traditions, a gripping saga of love, betrayal, hatred and magical transformation sinuously weaves itself. Copper Moon relates the fascinating tale of Odati, daughter of Emperor Ashoka by stunning Urvashi, a Kalingan devadasi. When a great horror strikes, and Odati’s tender young life hangs in the balance, it is the Egyptian Kahotep, Grand Eunuch of Maurya, who risks his own life to spirit her to safety. Within his protective embrace, Odati disguises herself as Amunet and gradually grows into a singer whose angelic skill enchants the elite of Pataliputra. And yet, beneath her lovely façade lurks a cunning assassin waiting for the perfect opportunity to inflict hellish suffering on the man who drove her into the abyss of hell. Impervious to the luminous teachings of Gautama Buddha and other great sages, Odati relentlessly pursues her diabolic quest for revenge. Then, in another bizarre twist of fate, her evil is discovered and she is once again forced to flee for her life. It is now that the jewel-like wisdom she has so fiercely resisted begins to open the reluctant petals of her heart.”

Click here to purchase a copy of Copper Moon Over Pataliputra.