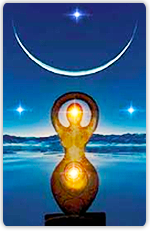 Years ago in Manhattan I enjoyed attending a spiritual meeting where people of varied ethnic backgrounds, professions and ages congregated to remind themselves of the power of the Divine running through their often thorny lives.

One guy—a talented young actor who’d made it big in a Broadway show, and who had then been fired unceremoniously when its sponsor went bankrupt, had been breaking my heart with his stark honesty about the frightening situation into which he’d been hurled: on the strength of the lucrative role he’d just lost, he’d bought an expensive east side condo and married his girlfriend—who, to top it all, was now heavily pregnant.

Success, he confessed miserably, had gone to his head like pink champagne used to: anticipating a large income for an indefinite period of time—Broadway shows can run forever—he and his wife had extravagantly remodeled their new home and taken a slew of expensive mini vacations. Now unemployment and other benefits were barely keeping them afloat; when the baby arrived, things would get worse: if he could not pay his mortgage, he would lose his condo.

The blues had not kept him cowering at home. He’d already begun to audition for other roles—and been rejected time after time, even when it was clear his rivals could not hold a candle to his own thespian skills. Terror would flash across his face at the thought of being forced to move back to his conservative family in the Midwest—just so his girlfriend could have their child minus the stress of living in penury in the Big Apple. Dear God, he begged out loud, give me a break! END_OF_DOCUMENT_TOKEN_TO_BE_REPLACED

Strolling down Manhattan’s Broadway in the early 1990s, I stopped to stare at a dramatic hoarding, the elements of which I shall attempt to recapitulate for you: a smoldering cigarette hangs out the corner of the mouth of an older woman with a halo of frizzy gray hair; her heavily made-up face barely masks a mesh of wrinkles and furrows, her cunning eyes are narrowed as a shield against the rising smoke, her cracked smoker’s lips are painted a bright red; as for the ironic caption below, it reads: Smoking Is Glamorous.

Oh what a powerful message! I thought, even as I dragged deeply on the fragrant Nat Sherman cigarette hanging, Bohemian style, out of the side of my own mouth. But despite the irony of that moment, that harsh image continued to hover on the fringes of my insubordinate mind, warning me how I might end up if I didn’t quit smoking.

Back in India, two upper-class women of my mother’s generation had ended their lives looking pretty similar to the hag on the hoarding. Both had thumbed their noses at convention and taken up smoking and drinking with a vengeance. Both had died heavily burdened by the circumstances of their lives, their striking beauty a sad memory; despite medical warnings, the mounting concern of their respective families, and their own fierce wills, neither had ever been able to quit either ciggies or booze. END_OF_DOCUMENT_TOKEN_TO_BE_REPLACED