Almost twenty years ago, my Manhattan-based literary agent planted in my consciousness the seed of a contemporary novel—and so began to flower the saga of a brilliant and rebellious Indian girl who grows up in 60s south India, and, against all odds, metamorphoses into a Spiritual Warrior when she is forced to go into mortal combat against a ruthless serial killer.

I wrote Krishna’s Counsel in bits and pieces as I traversed the globe, seeking the perfect womb within which to complete my creative and spiritual work. I put the seal on this second novel in the shadow of the sacred hill Arunachala, symbol of the pure consciousness which is the substratum of our true nature.

Thanks to our impulsive foray into Kindle Scout, you have all heard way too much about this “Mystical Novel of Obsession & Illumination”; if I had the sorcery to turn back the clock, I might have done things differently—and yet, as Lord Krishna himself might inform us with a twinkle in his divine eye, nothing is an accident and all events have far deeper purpose than we can conceive of at the time they happen.

Anyway, Krishna’s Counsel is finally making her international debut…and except for the print edition (POD) which will become available on Amazon.com on SEPTEMBER 3, 2016, all the e-book versions are ready for pre-order. Oh, and for those of you who enjoyed my first novel, Whip of the Wild God: A Novel of Tantra in Ancient India, or would like to read it now, please know that I decided to give her a final polish…and now Whip too is frolicking out in this mad, mad world, garbed in resplendent attire. END_OF_DOCUMENT_TOKEN_TO_BE_REPLACED

“The greatness of a nation and its moral progress can be judged by the way its animals are treated.” – Mahatma Gandhi

Giving from the heart is said to be the first of the great virtues that lead us to permanent freedom from suffering—and not just giving to family, friends or to those important to us in the mundane world—but to animals desperately in need of love, food, shelter and healing—yes, to dogs, cats, cows, snakes, monkeys and other animals in dire straits, sensitive and defenseless beings who’d bless your heart of gold for making their thorny lives just a little sweeter. In fact, while the world might consider you a reckless idiot for giving generously when the wolf is pounding on your door, the radical seeker of enlightenment is taught to give especially when the chips are down—for it is giving, minus the ego, that burns the bad karma that weighs us down. That said, it is such a delight to be able to give to the unfortunate—without strings and straight from the luminous heart! END_OF_DOCUMENT_TOKEN_TO_BE_REPLACED 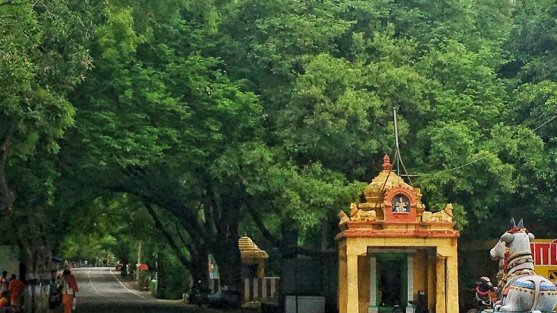 About a hundred activists and concerned devotees assembled on the Girivalam Road on the morning of July 1st to halt the destruction of the beautiful old-growth forest which the authorities claim is necessary in order to widen the road. Forming a human chain, they resolved to transform the situation without resorting to violence. As a result of this concerted protest, the Collector of Tiruvannamalai, A. Gnanasekaran has suspended the order on felling these trees until he further investigates the issue.  He has assured the people of Tiruvannamalai that he will explore the possibilities for alternative alignment. Although the protesters seek total withdrawal of the project, they welcomed the gesture of the Collector.

The project proposes to widen the road by 7 to 10 meter along the 14 km route around the Tiruvannamalai hill and apportion a lane for Girivalam devotees to walk around the hill. Though devotees circumambulate the hill every day, lakhs of people perform it every full moon day.

If you love Arunachala, Ramana Maharshi, Tiruvannamalai, the earth, our cosmos, or simply love the beauty of ancient foliage, please sign the petition (link given below) and share this as widely as possible so we can stop the murder of our gorgeous trees.

Here’s the message I received from concerned folks:

The proposed widening of the Arunachala Girivalam / Pradakshina road by the Tiruvannamalai administration will lead to an irreplaceable loss of ancient trees, forest lands, sacred groves, and cause considerable damage to sacred tanks and temples. The farmers whose lands will be acquired for the project will also be severely affected. Any relocation or shift of this ancient walkway, will also be an incalculable loss of our historical and cultural heritage to present and future generations.

The project, which in some places involves re-routing of the road, will cause irreparable damage to the Sona-Giri sacred grove, the only intact sacred grove on mount Arunachala. It is home to Spotted Deer, Langur, Indian Porcupine, Jungle Cat, Small Indian Civet, Palm Civet and more. Over 70 species of birds, monitor lizards, numerous snake species and the endangered Indian Star Tortoise can be found there. This rich number and diversity of wildlife, which is already protected under longstanding Indian laws, has been put in harm’s way by the proposed Girivalam Road expansion which will also adversely affect the two sacred thirtams within the grove.

The project will also lead to the loss of a number of ancient tamarind trees that provide shade to the barefooted pilgrims who undertake the Girivalam and many Sadhus who live under them. Even if new trees are planted in their place, they will take decades to reach a similar size and stature. Already some 30 tamarind trees have been lost as a direct result of the pavement construction on the left side of the Girivalam Road in recent years.

The present route of the Arunachala Girivalam path follows one that dates back centuries. It was formally marked during Pandya times centuries ago following a route already long in existence at this time. The marker stones laid down by the king were still visible until recently. Any change in this route will be a loss of cultural and historical heritage, cherished by pilgrims around the world.

The planned expansion of the path also cuts into a number of ‘Rest-a-While’ parks created by the administration for the benefit of pilgrims and local wildlife. These parks provide a tranquil resting spot for those doing the 13 km Pradakshina, and enhance the protective buffer for adjacent Reserved Forest lands.

Unchecked development around the Arunachala hill has already placed extreme pressure on the forest areas and the wildlife therein.

We appeal to the relevant authorities to immediately stop all tree felling, and devise an alternative plan that will preserve the irreplaceable existing forests, avenue trees, and sacred groves; to make improvements to the pilgrimage experience by regulating the vehicular traffic thus creating a peaceful atmosphere, without the loss of forest or revenue land around the sacred hill Arunachala.

“The greatness of a nation and its moral progress can be judged by the way its animals are treated.” – Mahatma Gandhi

As ho ho ho time looms again, perhaps you’re open to giving away a wee bit of what’s been lavished upon you by this spectacular cosmos—and I’m not talking about special gifts to family, friends, clients and other people/causes connected to your own well-being and way of life, but this time to dogs, cats, cows, snakes, monkeys and other animals in dire straits in a far-away world—marvelously sensitive and vulnerable beings who’d likely bless your heart of gold if only they could—for making the rest of their lives just that teeny weeny bit sweeter.

Pity most Indians don’t hark to the profound words of the Mahatma—possibly because the great majority of us are still ignorant of the wisdom he poured into the coffers of this vast and paradoxical nation that bristles with such sharp inequities. Based on what I see here in Tiruvannamalai, the rural poor—many illiterate and struggling to keep it all together in a rapidly changing world—don’t treat animals as if they even had rudimentary feelings—except when those animals are of commercial use. As for the wealthy—contrary to standard international thinking, there is a large segment of Indians who enjoy far higher standards of living than their counterparts in the west—they tend to treat their pets exceedingly well, some spending great amounts on gourmet food and vet care, but those are in the minority. END_OF_DOCUMENT_TOKEN_TO_BE_REPLACED

My guest today is Mira Prabhu.  Hello, Mira!  Welcome to Writing in the Modern Age!  It’s such a pleasure to have you. 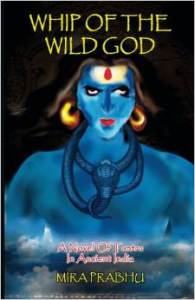 Is there anything that prompted your book ? Something that inspired you?

I grew up in an unusually westernized community in south India. Bizarrely enough, I only began to investigate my ethic origins after I got to Manhattan in my mid-twenties. Eastern philosophy, particularly the ancient teachings on tantra—which transliterates roughly as ‘the explosion of consciousness’—fascinated me. It saddened me that the original purity of tantra seemed to have vanished; both in India and in the west, tantra was generally equated with unbridled hedonism. And yet I was learning that a genuine tantric/tantrika cultivates a strong ethical and philosophical foundation—without which one is not permitted to take a mate; the process of laying a proper foundation can take decades. 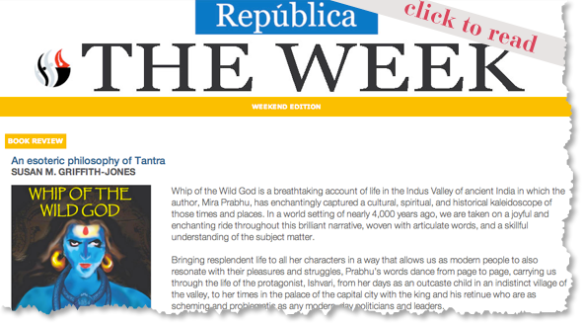