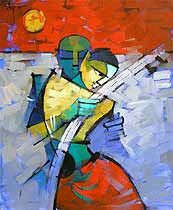 I owe a colossal debt of gratitude to a woman I shall call Grace, whose kindly face, hennaed hair, hooked nose and elfin green eyes still come with great affection to mind. I met her over a decade ago, at a friend’s potluck dinner in Eugene, Oregon—a fairytale town where I wouldn’t have been surprised to see a hobbit or two frolicking down the road, yodeling a hey-ho-happy-to-be-alive kinda song.

Instead of enjoying this slice of paradise, however, my thoughts had begun to stray obsessively into the future—specifically on the looming prospect of having to leave Eugene for south India, where I’d set in motion the construction of a beautiful home for myself. Whew, was I mad at myself for taking this big step! My radical ways had taken me way out of the Indian mainstream…and when, for God’s sake, had I ever fit into my conservative community? But now it was too late—huge amounts of money had already been paid towards this dream dwelling, and this time I had no option but to suck it up and go with the flow.

The open-hearted folk of Eugene only intensified my reluctance to return to India. To de-stress, I regularly did yoga, meditated, hiked with friends and sang with my guitar. But at night, the demon of anxiety would fly in through the window in a flurry of dark wings and sit triumphantly on my chest, draining me of energy. Soon enough, the blues settled like a toxic mushroom cloud over my frazzled head. One night I wandered into the backyard of a friends’ place after dinner and I spied a woman called Grace sitting alone at a picnic table beneath a star-speckled night sky. I’d heard someone say she was a sort of urban healer, and that she worked for free.

Grace welcomed me with a big smile and said she’d once dreamed about visiting India with her husband, who’d been fascinated by our ancient rishis and Vedanta philosophy. But he’d died of a heart attack twenty years ago as he was biking along the Willamette River, and the bottom had dropped out of her world.

“Cara said you’re some sort of healer,” I said on impulse. “My mind’s been driving me insane. Would you give me some herbs to help me sleep?” She placed a gentle hand on my arm. “What’s worrying you?” And suddenly I was spilling out the stream of paranoid thoughts that harassed me continuously.

“Well, honey,” she said. “I used to be the biggest worrywart…went to pieces after my husband died and could barely get out of bed.” Moonlight revealed the lines suffering had etched into her face. “Then a friend suggested I help out at the local hospice. I met a patient there, dying the most painful death, but still a magnet for the others. He told me his secret—that he’d trained himself to always look on the bright side. If I wanted to be happy again, he said, I should start my day by listing five things I was grateful for.” “And this worked?” I asked dubiously. “Sure it did, honey!” she cried. “Its white magic, this positive thinking.” She lowered her voice to a dramatic whisper. “Tell you what…I’ll be your gratitude sponsor. Call me every morning for the next month and give me a list of five things you’re happy about. Wanna give it a shot?”

I lay in bed next morning forcing myself to drum up those cursed five things for Grace. Then I heard someone talking on the street below my window. I poked my head out and saw the quadriplegic who lived down the street being pushed in his wheelchair by his long-suffering wife. Omigod! At least I had all my limbs and my faculties, a little the worse for wear, but still in pretty good shape. I struggled to come up with number 2. Hmmmm…unlike so many others who’d taken the road less travelled, I’d managed to save enough to retire in the East. Wasn’t that another huge reason to be grateful? Then I considered my passion for writing—hours would vanish into the ether as I poured my heart out in words. Which made three. And what about the organic broccoli and Lundberg short-grain brown rice I’d planned to cook for brunch? Seasoned with Japanese toasted sesame oil, cracked red pepper, olive oil and a dash of tamari, it was my favorite health food. Hey, that made a total of four things to be pleased about!

I jumped out of bed, showered and pulled out my yoga mat, anticipating the deep relaxation I’d soon feel. And that made five—that I had learned how to calm body and mind with yogic techniques and meditation. How many millions are condemned to seek comfort from a drink, a joint, shopping, sex or whatever when their minds are giving them hell?

Bizarro, but already I was feeling much lighter! I dialed Grace’s number and blurted out my five things. I could feel her smiling on the other end. “Good,” she said. “Enjoy your day and call me tomorrow. And, honey, jot down those five things you just rattled off to me, okay? Do this every day from here on—that’s an order!” (Continued in next post).

Greetings from Arunachala, Shiva the Destroyer in the form of a hill of fire and light, who gives us all the powerful tools we need to combat our dark side so we can realize our Self to be immortal light!