Ages ago in America, a friend I was visiting over the long Thanksgiving weekend, told me that she had her ex-husband had never really gotten along. She had married him on the proverbial rebound several years after her fiancé, whom she had loved, had died in a surfing accident, and simply because her avaricious insecure social-climbing mother had coaxed her to hang on to him for all he could offer her in material terms.

He was a cold and distant man who had done very well for himself financially. He did not love her, nor did he claim to, but because she was glamorous and charming, he did value her highly as a social asset. While their love life was non-existent, he appeared to be content to squire her to social events as his trophy bride. Early on she had longed to escape him and to pursue a different lifestyle, but when she turned to her mother for support, she was sternly reminded that she had struck gold and should be content. (Why she’d listened to a mother as crass as this, I still can’t figure out, but I do know the woman was a widow and my friend an only child, and that this had brought them close.)

She and her ex never wanted kids, she said, which was a good thing or she might never have gotten interested in eastern philosophy (via hatha yoga), and never realized there was more to life than the superficial good times available to her as the wife of a wealthy entrepreneur. The radically new worldview she so acquired had such an impact on her psyche that she had finally left him. Although she did not ask for much, he was generous enough to insist on providing her with a lifelong settlement; and then, ha ha ha, she added dryly, he had promptly turned around and married another trophy.

It was only when she started deepening her knowledge of the limited egoic self that she realized that her decades-long marriage had been convenient only for her ego, and not for her Self (the Divine or Absolute, our true nature according to the eastern mystics). It sickened her, she confessed, that, for instance, that despite being crazy busy with his work, her ex would insist on being present when she met with her bankers every month, but would refuse to spend any quality time alone with her. He had no interest in her as a woman or as a person, but genuinely wanted to protect her financial interests. This one thing clearly revealed to her that all he cared about was money, while he didn’t give a damn for her soul.

I told her how blessed she was to have had such a realization. You see, I had encountered many other women, some also married to rich and powerful men, who had no clue that there was more to life than indulging themselves and their children in excessive materialism. One of these women spent all of her time going from one plastic surgeon to another, getting face and body lifts, because she was terrified the man would dump her for a new model! What a way to live, I had thought, I would rather be dead than invest all my energy in trying to please a superficial mate.

Now I had met this friend at a spiritual meeting in Manhattan and we were instantly attracted to each other, probably because we had each gone through so much and were both fascinated by eastern philosophy. She was in her early fifties then and lived simply but well in a beautiful area in upstate New York, besides a sparkling stream and surrounded by woodland. She enjoyed her solitude and spent her time reading, painting, meditating, and focusing on inner work. “I’ve never been happier,” she said at some point during that weekend that I later spent with her. “And it was all because I was so intensely miserable that I was literally forced to find a reason to live. Thank god I decided to do my teacher training in yoga. My guru was a deep man who sensed I needed real help, and he made it a point to guide me. We’ve become close friends over the years, and through him, I’m drawing closer to that immortal Spirit you Indians speak about so casually.” She smiled. Now I know the Divine is not a sweet fiction; come to think of it, what feels terribly unreal is all that time I invested in the transient.”

Thinking over this distant encounter, I realized how fortunate the modern West is (apart from religious fundamentalists!) to not be stigmatized for seeking freedom from an unfulfilling marriage. Here, in India, a society so complex and multi-layered that it boggles the mind, divorce is still a very dirty word. Women who seek their freedom even from the worst mates are hounded, harassed and even ostracized; one can well empathize with their willingness to stay put, no matter what, and suck up their misery. And what about the men? Not surprisingly, it is usually the wealthy who stray: Money has opened up many new portals for them and they are exposed to an international world where they can often make their own rules and get away with moral murder. However, I’m sorry to say, despite the surface sophistication of many, inside they are often mama’s boys, terrified to break free of their matrix lest they bring the hammer of community disapproval down on their heads.

You might be stunned if you knew how many there are of this ilk all over India: men who want to have their cake and eat it too. They proposition particularly women who are Westernized, believing that such females are bohemian and free and have no scruples in relationship. Because they worship money, they wrongly assume this is the case with everyone. Some flit from one sad relationship to another, hoping to distract themselves from the emptiness of their fake lives, and so never ever grow up. I asked one such rich fellow who had complained to me about his wife, why he did not just leave her. Oh, my mother would die of shock, he said, and what about the children? (You see? He didn’t give a damn for the wife, only for his old dominatrix of a mother and his kids). His mother had arranged the marriage, he ran on miserably, and his wife was perfect as a home-maker and as a mother, although she was so boring and limited in her range of interests that he could not even talk to her beyond domestic matters.

I shook my head, and told him that if I, a woman also brought up in a traditional and conservative family, with no support from anyone but my guru and a few Western friends, could have had the courage to walk out of my marriage, knowing full well I was about to lose everything material (since my husband was so sneaky in that area), then certainly he could. No, he said, that is not possible in my case, and I realized that the walls of the ego in some cases are built of concrete reinforced with steel, and that most humans simply lack the integrity and guts to break away and seek true joy. In truth, after the initial brouhaha of a “scandal” has died down, no one cares any more, and you can then restructure your life to seek the only peace worth having—that which comes from the depths of the Spiritual Heart. 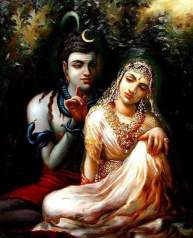 Greetings from Arunachala, Shiva in the form of a hill of fire and light, who powerfully aids us as we shed all that blocks us from knowing we are the blissful and immortal Self!

Note: The REBLOG option is available only when viewing the post in full. Click on the post-title above if don’t see the REBLOG button below.

4 thoughts on “A MARRIAGE OF CONVENIENCE”