After the initial intense discomfort of leaving a marriage that was throttling me emotionally, and blocking my spiritual and creative progress, I was once again enjoying the richness of life. Soon I began to feel an exhilarating sense of freedom.

Now Manhattan is the perfect place for a single person to taste every flavor of liberation—a fabulous city that never sleeps and has something for everybody. (This was before the World Trade Center bombing). Brimming with exciting things to do, not just in the way of entertainment, Manhattan catered to the spiritual seeker as well as to the artist and could be a whole lot of fun.

Folks I knew at work were mostly workaholics; they put in long hours, but from Friday evening through Sunday, they generally partied a lot. There were many times, I confess, that the constant pressure got a bit too much and I felt like a monkey pedaling furiously on a wheel just to stay upright. But still, I relished my new life and would not have exchanged it for another.

Among my personal friends were writers and artists, photographers, painters, even the odd sculptor. One cool couple used to throw regular parties at their trendy loft in lower Manhattan. Their round dining table was spread with goodies, cheeses, pastries and whatnot. A motley crew of guests brought stuff too, bottles of French wine, key lime pies, and bags of crunchy chips. Not to forget that the conversations that sprung up all over that vast room were interesting.

It must have been about 3 am on a Saturday morning when a guy I barely knew asked me how I, as an Indian woman who had rebelled against my societal mores, dealt with fear. I said that when I had first begun to live alone, I was so terrified of being alone in the darkness that a friend had strung tiny lights all the way from my bedroom to the bathroom, just in case. 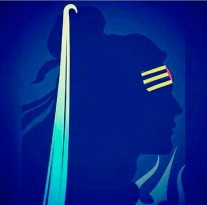 Another friend had given me two of his cats, and Lisa and Sweetie, my sweet feline protectors whom I will never forget, flanked me at night. But then, I added, I’d begun to dive into Eastern philosophy and to meditate seriously again, and the fear that lived inside of me—a grisly phantom that often had my knees knocking together—had fled due to my growing awareness of the constant presence of invisible beings of light and love.

So you’re tough now, eh? He demanded truculently. (What was his problem? I think an Asian woman must have given him hell.)

I guess so, I said, wary of where he was going.

Well then, I challenge you to walk all the way home from here, right now. Let’s see how brave you really are, ha ha ha.

I considered his proposal for a moment: I was a strong walker, as most Manhattanites are, and the walk home could be done in about an hour.

I’ll give you a hundred dollars if you do, he said. I saw he was anticipating a timid refusal, whereupon a devil got into me. Of course I can, I said, shocking him, but I don’t want your money. Before my hostess (she would have tried to stop me) could object, I said a quick goodbye and left.

Swiftly I made my way further downtown, and soon I saw the fantastic outline of the Brooklyn Bridge. That’s when Fear gripped me. All the way down here, there had been the occasional passerby, but now I could see no one. Tales I’d heard of homeless drunken or stoned drifters sleeping under the Bridge flashed through my head. It was a long walk over the Bridge, I realized, and I was utterly alone. Taking a deep breath, I started down the wooden length of it, chanting my mantra of protection nonstop.

My imagination was going wild, and I thought I heard someone stealthily following me. I didn’t turn around, just continued with the mantra. The footsteps became more distinct and my heart began to flutter with panic.

Then a cyclist, believe it or not, flew past me: Black ensemble with glittering lights circling the wheels of a superb racing bike. Another cyclist whizzed past me, dressed in exactly the same way, and then another, and another, until a long line of these beauties were riding silently down the bridge. I realized that they were probably a foreign group of pro cyclists on tour in Manhattan. I almost ran beside them on the other side of the walkway, and finally reached the end of the Bridge. I stopped to heave a huge sigh of relief, for my apartment was not that far, dawn was breaking, and there were already signs of life in lovely Brooklyn Heights. No one would dare to attack me now. I watched the last cyclist glide into the distance and walked rapidly home, thinking I’d been right all along—great beings were indeed watching over me.

I’ve told many friends this story over the years and all have been baffled that I’d take such a risk. You could have been raped and murdered, one said sternly, and he was right. So what made me do such a stupid thing? I could have laughed at the guy and told him to buzz off. The fact is that I did not. The answer probably is that I wanted to be Superwoman in the eyes of my friends, and a cut above the usual nervous woman from the East.

Today I’d laugh at anyone who asked me to risk my precious life in such a way, because wisdom and caution are essential to living on to accomplish my goals. But that night I was both a rebel and an idiot; still, looking back, perhaps because of the rare beauty of those cyclists flying over that gorgeous Bridge, I don’t regret my madness.

Greetings from Arunachala, Shiva the Destroyer in the form of a hill of fire and light, who helps us realize that there is really nothing to fear, not even physical death, but only because our true nature is immortal and blissful!

2 thoughts on “4 AM ON THE BROOKLYN BRIDGE”