Neither of us being in the mood for the frenetic end-of-year partying for which Manhattan is famed, a friend and I decided to spend the end of 1993 at Ananda Ashram in upstate New York. It was stunningly beautiful in that snow-blanketed world, and I was immensely grateful for this respite: after years of trying every damn thing to make my marriage work, I had finally left my partner of fourteen years. All I’d carried away with me were my clothes, some furniture, a collection of books and music, and the bitter festering wounds of what felt like a major failure.

Ours had been an old-fashioned marriage: he had played the role of wily businessman, while I had slipped into the role of scatterbrained artiste. Convincing me I was lousy at handling money, he had assumed total control over our joint finances. Dutifully I had handed him my pay checks, and all our assets were in his name. His mother colluded with him. As his extraordinary good looks and charm began to pall, I could no longer hide from the wide swath of deviousness that marred his character. Even as my own horizons spiraled into the mystical, I felt strongly that it was better for me to be alone.

My friend Robin was aware that I had neither a bank account nor a credit card, both of which I would need in order to break free. One Saturday morning, she escorted me to Citibank on Sixth Avenue and hovered over me like a guardian angel as I opened my first checking account. This single act of defiance signaled a fresh start but also opened up a fresh can of worms; as the chorus of that terrific rock song goes, freedom’s just another word for nothing left to lose.

“I’d rather go to prison than give you one cent,” my husband said grimly, when I asked for a portion of our marital assets. Although New York divorce law was clear—each of a divorcing couple is entitled to fifty percent of marital assets—Big Apple lawyers cost big money. Adding salt to my wounds, the contingency law which allows a divorce lawyer to take a percentage of a settlement had just been rescinded. To keep from jumping out the window, I dwelt on how extraordinarily kind and generous he had been to me in our early years; he was not intrinsically a bad guy, I assured myself, just congenitally unable to investigate his own gaping faults. 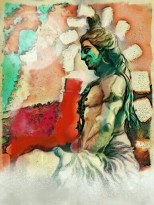 Instinct warned me I’d gain nothing by fighting him. Still, I consulted a few lawyers, but every one of them asked for thousands of dollars upfront—money I did not have. Finally I talked to a tough lesbian lawyer. “Cut loose,” was her terse advice. “You’ll never pin this rascal down. Fight him in court, and you’ll lose everything, including your sanity.” I took her advice, and began life as a single, staying afloat by freelancing as an administrative temp on Wall Street and in Manhattan’s law firms. (To be continued in the next post).

Greetings from Arunachala, Shiva the Destroyer in the form of a hill of fire and light, who vows to help us clear up the wreckage of our relative lives, so we can rest in the peace and bliss of our immortal Self!

2 thoughts on “Genesis: Whip of the Wild God: A Novel of Tantra in Ancient India: 1/4”