When I first landed in Dharamsala in the foothills of the Himalayas, straight from the frenetic city of Manhattan, I was lost and bewildered by a strange new world. Soon I found my way to the Tibetan Library, where every morning a beautiful old Geshe, aided by an English female translator, patiently taught us the ancient scriptures. I was sitting outside the small cafeteria when I saw a woman I liked on sight, nonchalantly rolling a cigarette. I asked her to roll me one, whereupon she handed me the fixings and retorted sarkily that if I wanted one, I’d have to roll it myself. Oh, I thought, amused, liking her even more, for she reminded me of folks in Manhattan who are also uncomfortably direct but also possess shining hearts of gold if you stick around long enough to get past the prickly surface.

We became friends, and I discovered she lived right above my beautiful apartment with the huge glass windows, through which I could gaze at the splendor of the snow-clad Himalayas. As a seasoned practitioner capable of handling any crisis, she was often impatient with me, rightly viewing me as a spoiled infant with no clue how to handle herself in a small Himalayan township peopled by hardy Tibetans (most of whom had bravely made their way over the mountains to be with their charismatic leader, who incidentally lived a mere ten minute walk away from me on the peak of a hill guarded by both Indians and his own people) and equally tough Indians.

Then she read a draft of my first novel and enjoyed it greatly; one sleepy afternoon she snapped at me that I was wasting my time moaning about the lack of interesting things to do and should start working again. Chastened, I listened to her, and soon the idea sprouted about writing a novel about Ashoka, magnificent Emperor of the Mauryas, who had dramatically transformed from cruel despot to benevolent monarch, and whose name, more than two thousand years after his death, still shines as a model of royal beneficence. The seed she planted in my mind so long ago has now grown into a full-grown saga and is about to be published as the third and final novel in my Moksha Trilogy. 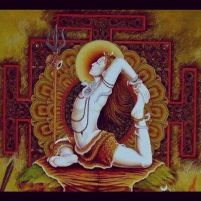 We stayed close over the years, despite my moving away from the mountains, back to the West and back to Mother India again, and even when I opted out of the Tibetan Buddhist fold and into the cradle of Advaita. During her visit to me here, we enjoyed ourselves immensely, no surprise since she and I have a lot in common, mainly that we are both devoted to the inner path and are both known for our sharp tongues and unflinching directness.

Recently I was shocked to learn she had to be hospitalized for major surgery; I send light to her and all beings every single day, but now I went into hyper-drive, praying fervently for her recovery. aided by close friends who are making sure she is on the mend, she is doing fine now, thank god. This post is not to speak of medical matters, but to place on record how she impressed me with her amazing brightness and courage all through the grueling process.

I confess that physically I am a coward. An appointment with the dentist is enough to send me into conniptions, so to witness her staunch attitude and calm intelligence as she underwent a serious surgery was an inspiring and moving experience. Very few women I know have this capacity—to stay centered and happy even in the midst of a crisis. Modest as she is, I know she will downplay this tribute to her, but nevertheless I do this to remind myself how so many wonderful humans have shown me by powerful example how to face the many unexpected storms and tempests of mundane existence. Yes, we should all be so lucky to have a few sparkling gems like her in lives!

Greetings from Arunachala, Shiva the Destroyer in the form of a hill of fire and light, who guides us unerringly to know that we are far greater than both our desires and our fears, into the incandescent light of our own Self!