My father taught me a powerful lesson growing up; I watched many a time as he out-intimidated the legion of official and governmental bullies that routinely harass all Indians and make millions of lives miserable. “Do you know who I am” he would roar, and the would-be bully would literally quake with fear and trepidation. And he did this with genuine anger, because this kind of official misbehavior personally offended him. He stood up not just for himself—in his prime, he was a wealthy, powerful, articulate and educated man with immense influence—but for those with lesser resources, and even for the illiterate poor who had no option but to bow down to these horrible apologies for man so that they could get their work done. Since survival was a burning issue for many of these people, and the bullies knew they held the winning card, most often there was no competition.

Recently I was reminded of how the Indian poor in particular are hounded, harassed and cheated when my maid came crying to me to inform me that the local police had extracted a huge bribe from her laborer brother. Her brother had beaten up his wife’s lover and brought her back home after a sensational elopement. I told my maid I would go with her to the Collector’s office and help her to make an official complaint against these men—something I would hate to do since I dislike offices in general, and the men who run them even more; but I felt so awful at the thought of this poor man being bullied and robbed that I felt I had to do my bit. And what did she say? Gave me a shrug and said it wouldn’t work, that everyone was corrupt and all the family could do in such a situation was to suck up this huge crime and carry on. I yelled at her and said it was because of this passive attitude of the voiceless masses that things have gotten to this ghastly state, but of course she did not understand where I was coming from and did not accept my offer. 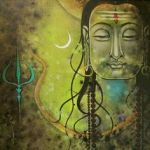 Now yesterday I had a situation that I had to confront. A man I had hired to do some important work was playing his usual passive-aggressive role and harassing me by demanding that I go to his office a hundred times to keep tabs on the status of my work, and by not keeping his word, which is a major crime in my book. Nor was he picking up the phone or responding to emails. Since I had dealt with this same tedious scenario for a couple of years, I decided enough was enough. So once again I went to his office but this time I blasted him in front of his employees. And guess what I said in addition to many other things? Do you know who I AM? Only this time I wasn’t referring to who I was in the relative world but to who I AM in the Absolute sense—pure existence, awareness of bliss, free of desire and fear in my ultimate being and beyond all human machinations. Of course he did not know this, but he was cowed, begged my pardon, and promised to finish the job promptly and efficiently. You see, local men do not encounter women like me who are capable of standing up for their rights; I honestly feel more women should be encouraged to do this.

Yes, this is what happens when one is willing to stand up to bullies—they back down and are reduced to a quivering mass of fear themselves. Call it Instant Karma. Of course sometimes things backfire, and we should be careful and choose our battles carefully, but we are always the winner in the sense that we are choosing to be a spiritual warrior. By doing what we believe is the right thing to do, regardless of the consequences, we grow enormously.

In my personal life, I refuse to deal with bullies and passive-aggressive crooks and conmen who think that because you are a woman and, in this case, someone they consider a clueless foreigner, they can get away with murder. When I returned home, I realized I did not have a shred of regret for having stood up so fiercely to him; instead I realized I had done the best thing for all concerned, which is the eastern definition of a good act. I had stood up for my right to be treated with courtesy and respect, and I had forced him to look at his own bad behavior, and I hope, as a result, he will be more loving to those who rely on him for help.

Over the decades, in East and West, I have encountered many, men, women and children, who sink down passively when they are mistreated. My plea to these people is to stop doing this immediately, no matter what happens. The consequences of cowardly submission are varied and many, of course, but mainly, you lose respect for yourself and joy begins to drain out of you. The Bhagavad Gita is a great teacher for me—especially when Lord Krishna urges his kinsman, the glorious Pandava Prince Arjuna, to fight the good fight, regardless of the consequences. It is a teaching I received many years ago from a beautiful yoga guru who turned me into a teacher myself (I mean hatha yoga); his teaching was so pure and authentic that it awakened my passion for Indian wisdom (which is really perennial wisdom that belongs to all humanity) and it set me on a path that has led me to where I AM today, in the capable and loving hands of great gurus who prove to me on an ongoing basis that my essence is nothing less than pure fearless bliss.

Greetings from Arunachala, Shiva the Destroyer in the form of a hill of fire and light, whose sacred vow is to destroy all the fear-bound shackles that block us from knowing that we are the eternal and glorious Self!