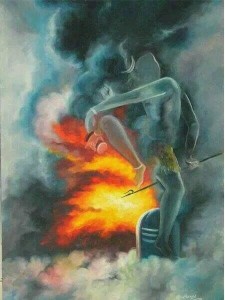 I love stepping into a new year for one major reason—a fresh chunk of time yawns before me, encouraging me to drop destructive behaviors and to cultivate new habits that better serve my highest goals. I decided to make this an early post (in 2017) so I can share with you how I came to dump the garbage of the past in order to create the kind of life I sought.

Well, a few years after my return to south India from New York at the cusp of the millennium, a Haitian woman I met at an Ashram asked if she could stay at my home for a couple of weeks. I agreed, albeit reluctantly, for at the time I was in a state of profound confusion and really didn’t want company. You see, I had returned to India to find a sure way to inner peace, but every one of my plans had gone awry; now, many crises later, I did not know which way to turn. Returning to the USA was tempting for various reasons—in general, a circle of good friends and a much more liberal way of life—but then I had no desire to get back into the 9-5 boogie in order to keep body and soul together. As for India, after enjoying the exuberant frenzy of life in Manhattan, I was finding it difficult to re-adapt, especially since my beautiful new home was located in the suburbs and it was a real chore to drive all the way to the city on a regular basis where I could engage in new activities. I had reached a mental and emotional stalemate and panic about the future was driving me pretty crazy.

I guess this woman she felt sorry for me. One sunny morning she led me to the terrace and handed me an empty notebook. “I want you to write down all that is bothering you, and please don’t ask why,” she ordered peremptorily. I obeyed her and quickly scribbled down all that was weighing me down. But when I offered her my sob story to read, she shook her head firmly. “Write it again,” she said. Her expression was so stern that once again I obeyed. This happened several more times, believe it or not, until I realized my tale of woe was getting shorter and shorter and I was getting thoroughly sick of it! Finally she gave me a brilliant smile and said: “All right, now you can see it’s just another boring story. Time to drop it and get on with your life—you are far more than your stories—you are LIFE itself!

Now I am a writer and I love stories. Stories are rich and fascinating and can inspire us enormously. But, as many of us figure out over time, to concoct a story about our lives that keeps us trapped in dysfunction is a dangerous thing. (Here’s another technique I later learned  that helped me enormously to pull myself out of the quicksand of yet another seductive story: https://miraprabhu.wordpress.com/…/quiche-coffee-the-morni…/) 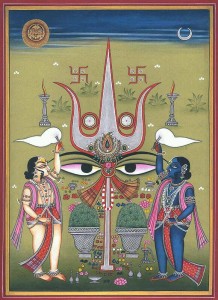 Many of us are terrified of letting go of our stories for the simple reason that we fear who we will be without them. We like our roles, or we would not play them with such gusto: the martyr, the victim, the do-gooder, the critic, the angry one, the deceived and betrayed one, etc etc ad nauseam. But if we seek to reach our highest potential, it is critical that we do so and I’ll tell you why.

Here are the stories of two women I met in recent years whose clinging to old and negative stories seem to have ruined their lives. One was born in the West, came to India in her middle years with a guru and decided to stay on. This is her story as she told it to me: She was born to a paranoid schizophrenic mother; unable to cope, her father dumped her in an orphanage when she was only three. When her mother passed away four years later, this 7-year old was adopted by relatives who abused her in many ways (not sexually, thank god) even as they lavished love on their own two kids. One disaster followed another until this girl turned toxic with rage. As an adult, she managed to make a good living and saved up her money—so, when she finally came to India, she was able to live very well on her income. And yet she was never grateful for her myriad blessings and made it a point to trash the locals who served her, not to mention every friend who came her way. One guy confessed he stopped visiting her because, for every excellent cup of coffee she brewed for him, she would pour ten cups of poison into him! Of course her rage came from never properly dealing with her childhood traumas; had she burned her old stories in the fire of wisdom, given her natural intelligence and many talents, I am quite sure she would have been a delightful woman with much light to offer our world.

Another woman I met recently spoke only of her evil mother and joint family who she claimed had ruined her life by preventing her from going to medical school. “Why don’t you study healing now?” I asked. “Oh, it’s too late, my family totally screwed me up,” she said. As I got to know her, I realized she really needed to cling to this story so she could continue to hate and blame—yes, it served as the perfect excuse to never take responsibility for her own happiness. This woman was so bitter when I met her that I feared she would take her own life. But nothing I said or did to help had any effect—the poison had seeped into her marrow and finally I cut loose. 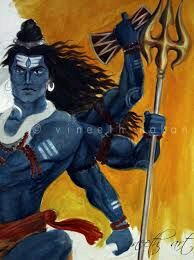 We all know folks who turn into their own worst enemies simply by clinging to stale old stuff that should have long since been jettisoned. It’s tough to change and my belief is that it does not serve us to dismiss our past—what works better is to sort out our relative history with as analytical an eye as possible, be courageous enough to feel the emotions that come up, then allow them to pass through us once and for all. It also helps to constantly keep in mind that we live in a world where everyone suffers without exception. If we commit to this cleansing, it is possible to burn all relative garbage in the fire of new wisdom and then to move forward freely into a friendly future.

Many years after my encounter with the Haitian healer, I re-encountered the teachings of Ramana Maharshi, the great south Indian sage who taught the Direct Path of Self-Investigation. Volumes have been written about this path to oneness, but in essence it involves destroying the egoic self, mini-me, so that one merges into the luminous and blissful Self that sages assure us is our true nature. It is the invisible but extremely seductive mind that runs our relative show and keeps us spinning our destructive stories—but the mind, as Ramana says, is nothing but a bundle of thoughts. These thoughts stem from vasanas, karmic trace impressions of past lives, and they form predilections that push in certain directions. It is only by learning to rest in pure awareness that we can dissolve these vasanas; then the mind, deprived of its base, sinks back into the ocean of Self. End of all stories!!!

Greetings from Arunachala, Shiva the Destroyer in the form of a hill, who vows to aid us in this awesome task of returning to the blissful peace of our true nature!

Note: All the details regarding the characters in my posts have been changed to protect anonymity. 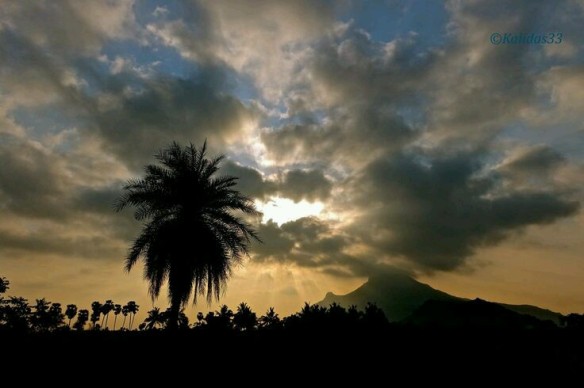