Today I’m sitting down with Mira Prabhu to talk about her new book, Krishna’s Counsel. The book is a modern epic of a girl growing up in South India during the 1960s, and it brings together a very unlikely but fitting combination of ancient Indian wisdom, the 60’s drug culture and the recovery steps of Alcoholics Anonymous. Additionally, it is currently enrolled in the Kindle Scout Program and could be chosen for an Amazon publishing contract. Part of the process involves nominations by readers (like you!), and if the book is chosen by Amazon, everyone who nominates it will receive a FREE e-Book copy. To read the first chapter and nominate the book, go here. This Kindle Scout program ends August 15, 2016. 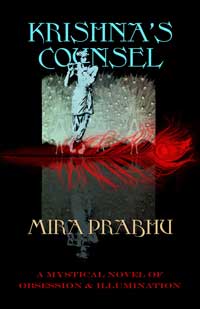 Mira, when you started writing this book, what was your vision for the story?

MP: I had no intention of writing a contemporary novel until my Manhattan-based literary agent suggested I do so, way back in 1999. Considering the unusual life I had led, she felt I could pull off a contemporary novel about an Indian woman who had moved from East to West and thereby grown in ways she could not even imagine. I mulled over her idea, but nothing happened until many years later when I found myself marooned in a guest house in Rishikesh in northern India: my friends had all left town since the ‘season’ was over and a wild festival raged all around me, keeping me captive in my suite. With time hanging heavy on my hands, I decided to sink my teeth into something that would engage my monkey mind—and in six months, I had written the first draft of Krishna’s Counsel.