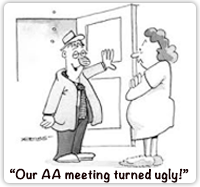 The non-addict does not understand why an addict continues to hurt himself. A “normal” person sees an alcoholic woman racked by smokers’ cough; her teeth are yellow, her fingers stained with nicotine, she stinks of booze, sounds like death warmed over, and is under medical supervision for a range of potentially fatal illnesses.

The “normal” person scratches her head, puzzled  — why the hell is this woman doing this to herself? Why can’t she just stop this nonsense right now? Why indeed! The bitter truth is that the urge to self-destruct is built into addiction, and only the fellow addict discerns this — which is why the Twelve Step Program — designed by addicts and alcoholics to help addicts and alcoholics stay sober — has such an astounding track record.

Built into this dis-ease of self-destruction is shame  — a sickening emotion that continues to fuel the addiction. The genius of the Twelve Step tradition lies in defusing this shame by encouraging addicts to speak openly about their demons. “We are only as sick as we are secret,” is one 12-step motto, and in the cozy anonymity of thousands of church basements and other meeting spaces all over the globe, addicts and alcoholics are encouraged to spill their deepest darkest secrets, knowing full well that they are not alone, and that they have the support of millions who famously “love them until they can learn to love themselves.”

A friend told me this true story he’d heard in one of Manhattan’s many anonymous Narcotics Anonymous meetings. The speaker was once a rising star on the New York Stock Exchange. At the height of his career, in his early 30s, he was easily more than a millionaire, had a gorgeous ramp model girlfriend, and owned an expensive condo in Sutton Place on the posh east side of Manhattan. Then, one fine day, a “friend” offered him a line of pure cocaine at a party…within a year, he was on the streets, having lost his job, his girlfriend, his apartment, the respect of his family, and all his money.

Sitting alone on the dirty bare floor of an abandoned and gutted building in Harlem one evening, having descended to the level of begging so he could buy a single vial of crack — much cheaper than cocaine — he finally admitted to himself that he’d lost everything he’d ever treasured to this white and insatiable demon. Withdrawal pangs combined with a ravenous hunger for some decent food.

As he sat on that grimy floor, too shattered to move, a mouse darted out of a hole in the wall. The tiny creature scampered across the floor to pick up a stale morsel probably dropped by another junkie, and scampered back into his hole. The ex-stockbroker felt a vicious stab of envy — that creature had something to eat and a home to spend the night! That creature was way better off than he was! He wanted to slit his wrists in that abandoned building, but he had no tool to do the job.

In that moment of utter despair, he heard a voice whisper to him that it was time to recover, and that in this great task he would be helped — if only he was willing to surrender. He was, and he did make it through that dark tunnel and into the light, but not without a tremendous amount of grit. Though he never again reached his old level of material success, he became a much happier man who spent his spare time helping those who needed a hand battling their demons.

Despite my own emotional roller-coastering, I am much stronger in my resolve not to surrender to the many seductions of the dark side. I keep in mind that Mara and Satan besieged Gautama and Jesus at their most vulnerable and critical times  —  and that these luminous beings knew full well that to succumb would have been to invite ghastly suffering. In fact, all the great beings who have risen into the light against all obstacles are my heroes, my icons, my enduring inspiration. Ramana Maharshi is one such blazing light who advises those who follow his simple but profound path to do that which takes you closer to the Self.

Today my practice of Vichara or Self-Investigation returns me on a necessarily quotidian basis to spiritual sanity. Today I know that my emotional demons harass and vex me only when my ego is in charge. As I keep moving towards the Self — pure existence-consciousness and bliss — there remains no good reason to hide anything, for the light that is the source of both manifest and unmanifest floods every single nook and cranny of the cosmos.