My own tumultuous life-path led me to break free of a marriage that was choking the joy out of me. Post-divorce, I severed my fifteen-year bond with Manhattan and fled to the other side of the planet, to Dharamsala, seat of the Tibetan Buddhist community in exile, nestling in the foothills of Himalayas. 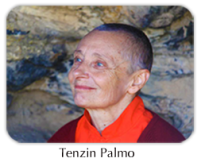 After barely surviving my first brutal Himalayan winter, I had the amazing good fortune to meet Ani Tenzin Palmo, a Buddhist nun of English extraction. Ani-la had recently returned to the area from a small cave located way over the snow line—after a thirteen-year solitary retreat!

I asked Ani-la how she’d survived there for so long, alone, and often in sub-zero weather. She had held my gaze with soul-penetrating blue eyes: those years had been the happiest of her life, she had replied in her crisp British accent. Even when the fellow who had promised to transport her rations on a six-month basis did not arrive on his hardy donkey, and she was forced to stretch her little remaining food over the next half-year, Ani-la had not balked, having prepared herself to die in retreat if need be. It was the combination of a lapsed visa and a growing compulsion to serve others that had persuaded her to leave her icy refuge.

I confided that reading her biography—Cave in the Snow—had stopped me from going berserk during the weeks I had been trapped, alone, in a rambling house I had rented in upper Dharamsala: piles of snow higher than a grown man’s head had rendered impassable the narrow road leading down the mountain; I had no decent winter gear, all power lines were down, my food was fast running out, and I was scared shitless of the panthers and bears that stole down from even higher areas on their nocturnal food prowl.

One night something big did hurl itself at my wooden door. I lay in bed, buried under every piece of garment I had carried from Manhattan, too numb with terror to even breathe. Either the effort to break down the door was too much for the beast, or some great force was looking out for foolhardy me; moments later it padded away, looking for other prey.

Next afternoon, help arrived in the form of my sardonic Himachali landlord and his skinny servant boy. As I dug into the ambrosial meal of rice, dhal and radish salad they had kindly brought for me, my landlord, grinning his toothless grin, had pointed to pug marks on the banked-up snow right outside my door.

Ani-la chuckled when I confessed that all through that ridiculous ordeal, I had constantly reminded myself that if an English woman could survive thirteen years in a freezing Himalayan cave, I could certainly survive the next few days.

When spring kissed Dharamsala into delicate new life, I began to taxi down from McLeod Ganj to visit Ani Tenzin, carrying loaves of the crusty bread she relished, baked by a gnarled old Tibetan who lived on winding Jogiwara Road. Ani-la was the first female spiritual warrior I had personally encountered, and I found myself in utter awe of her. (Many take my cheap guts for courage, but the truth is that—at least in the physical sense—I am a coward.) One day I mentioned that I yearned for a female guru: would she take on that role? I shyly asked. She shook her shaven head in refusal: her vows as a nun did not permit her to. Seeing my face cloud with disappointment, she offered instead to be my kalyanamitra, my spiritual friend.

In order for a kalyanamitra bond to be forged, both must be on the path to liberation or moksha. The bond is woven out of the golden fibers of higher values, and based firmly on the desire for mutual spiritual evolution. A kalyanamitra must always speak true—while holding the awareness that relative truth is subjective. You can squabble, agree to disagree, and even want to beat up a kalyanamitra—but you must never break the bond, unless you are certain that your kalyanamitra, rather than assisting you to locate that elusive inner gold, is actually hurting you.

I have not seen Ani Tenzin for over a decade;  thanks to her, however, I make no bones about surrounding myself only with heart friends. While I pride myself on being a maverick, I still suffer moments of doubt about whether I’ve done right in striking out on this road less travelled. It is during these critical times that a kalyanamitra inevitably arrives on the scene, ready to cradle me in metaphorical arms, until I am restored to peace.

Kalyanamitras appear when you cry out to the Universe for solace; like the Divine, they give you what you need, not what you want, and they come in every stripe. They can deliver a short message that turns your head around before disappearing, or stay in your life for decades. Sometimes you can even end up marrying one.